Every Friday we will be featuring a different runner. This week's Featured Runner Friday is Michelle! I hope you all enjoy reading her story as much as I did. She's a really amazing person. She might call herself a 'Hot Mama' but she's definitely a Sexy Mother Runner!
Meet Michelle
Anyone who knows me knows that I have never considered myself a “long” distance runner – or a distance runner of any kind. In high school and college I was a sprinter/hurdler and long jumper. Any event that involved running more than half a lap was not for me. Even running 400s in practice was torture as far as I was concerned.

My feelings about running didn’t change much after my college days ended. I did commit to running the 4-mile race in Steamboat right after college. I managed to do a little bit of training and survive the race, but that was both the beginning and end of my distance running career – or so I thought.

In 2009 – 2 kids and several years later – my neighbor and I decided we wanted to do Steamboat. My husband had been dragging me to watch he and his brothers run in marathons for a couple of years and I guess the excitement of those events gave me the itch to try it again. Rachel (my neighbor) and I signed up for Building Steam to force us to train and get on a schedule. I wasn’t sure what I’d gotten myself into and the first couple of weeks didn’t do much to convince me it had been a wise choice. At first I could barely run a single block on the East Peoria bike trail without stopping. As the weeks went by I gradually made it farther and come June, I made it 4 miles and beat my goal of running the race in under 40 minutes.

I continued running off and on through the rest of the year – not highly motivated but not wanting to lose the fitness I’d gained in training for Steamboat. I ran a couple more 5k races and enjoyed the relative level of commitment needed to finish them. I even started getting a little bit faster! Still, that was as far as I thought I’d take my running career.

Of course, as most of you know running one race can start to make you wonder if you’re capable of even more. Late in 2009 I was doing a run on our treadmill. My husband likes to hang around when I’m running. (I think he just wants to make sure I’m actually doing it and not walking.) To get rid of him I turned the TV to “Dancing With the Stars”. As he made his usual jokes about the dancers I mentioned that I’d like to take ballroom dancing lessons. Of course, as anyone who knows Matt will tell you, there’s no way he’d agree to that. Shockingly, he was willing to discuss on one condition: I had to run a half-marathon. I stated…..You Are On.

I signed up for the University of Illinois half marathon in 2010. I honestly never thought in a million years I would even think about doing that! My only goal was to finish, hopefully without walking. I spent several months building up my training until I was able to do a couple of 10-mile training runs on the EP trail, hills and all. Race day was warm and humid. Running through some water early gave me wet socks, which led to a HUGE blister. Still, I made it. I walked a very short distance in mile 11, but otherwise I was very proud of myself.

Now I had the running bug. It didn’t take long to decide that I wanted to do another one and actually “race” to see if I could beat my other time. I signed up for the 2011 Indianapolis Mini-Marathon. It’s a half-marathon that runs a lap around the Indianapolis Motor Speedway about halfway through the race. I kept up my training and with the help of some friends I beat my time by 9 minutes.

Michelle and her husband, Matt 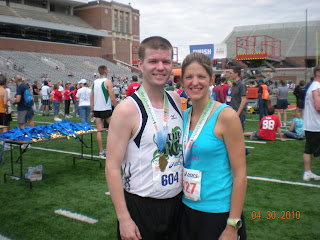 All of the running, encouragement, and goals would have never been set if it wasn’t for my husband AND a special group of ladies that I run with – the Hot Mamas. It doesn’t matter how fast we are or what place we come in, we are all there for each other. These ladies are all faster than me, but they decided to run Indianapolis as a group to help me to my PR. We had a blast. It still hurt like crazy, but it was great to have my team pushing me along.

Michelle with The Hot Mamas 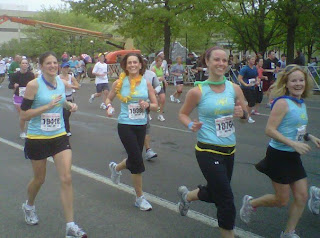 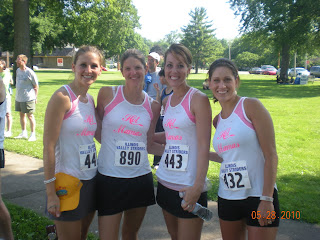 I’ve since finished another half marathon. That one was in Grand Rapids, MI last September. There I learned my lesson about running too fast early in a race, but I still matched my best time ever. Apparently I’m getting this half thing down. So…

There’s a new goal. This April I’m trying to push my limits even farther. I’ve signed up to run my first marathon at the University of Illinois. This is something that I want to do before I turn 40 in November. Again, my goal is to finish no matter what. Wish me luck, and see you at the Finish Line!

Posted by SexyMotherRunner at 6:59 AM