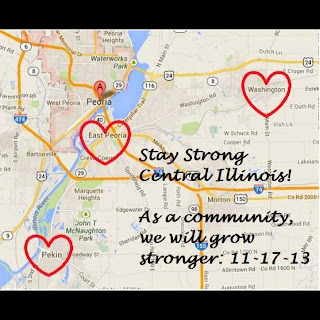 On Sunday our community was devastated by tornadoes. It's reported that 42 tornadoes occurred in Illinois. Within hours people were coming together to help those in need.

Three towns in my area were severely damaged. Pekin has reported 100 homes/buildings with damage. I live in a rural area between Pekin and East Peoria, which has damaged homes as well. Some completely destroyed. The worst hit was the town of Washington. Homes were leveled and sadly, one life was lost.

Steve Neubauer was a long time family friend. My sisters and brother-in-law were good friends with him. I've known him and his wife since I was a teenager. They are both wonderful people who would do anything to help out someone in need. Beth, his wife, just barely made it to the basement in time. Steve was on his way down behind her when the tornado hit their home. He is greatly missed by his family and his many friends.


I have friends who suffered minor damage to their homes and friends who have lost everything. My family who lives in Washington was thankfully untouched by the tornado but they are still without power and under a boil order. Our power went out on Sunday right as we made our own mad dash to the basement amidst tornado sirens, thunder, and heavy rain pelting our windows. Other than a few limbs down in our yard we had no damage. Our power came back on Monday afternoon.

One of the stories I read and can't stop thinking about was Julie Locke's story. Julie lost her son, Dax Locke, to cancer in December of 2009 and she is the founder of The Dax Locke Foundation. She now has a young daughter. Julie started writing a blog while Dax was sick and has since kept it up. She wrote about her experience during the tornado. Her house is in Washington. She had just gotten home from church when the tornado hit, they had little time to get to the basement. She covered her daughter's body with her own while the tornado hit their house. Once it passed and they were okay, she immediately went out to help others. She even gave her shoe to a person who had lost one of their own. I am repeatedly amazed by this woman's courage, strength and her spirit to help others.

One of my husband's long time friends was hospitalized with a broken vertebrae and collarbone. His house was also destroyed. His wife and children suffered minor injuries. You can watch his interview on the news here. You can also send a donation to help his family here.

These are just a few of the countless stories from Sunday.

In spite of the devastation, true beauty is everywhere. The beauty of the human spirit is shining bright in Central Illinois. People all over our area have come together to help in any way they can. Businesses are opening up their doors to those in need, organizing fund raisers, donating supplies. Churches have become Red Cross shelters. Utility trucks have arrived from out of state while utility workers are working around the clock on clean up and getting power restored.

One of my good friends, Danell, has a business called Go2Girl. She is one of the most kind-hearted people I know. She is donating her time this week by collecting and dropping off supplies/donations for anyone who needs assistance in the Pekin area.

Another friend, Kim, owns a chain of Papa Murphey's Pizza restaurants. She and her husband are donating 50% of their proceeds on Thursday of this week to the Red Cross tornado victim fund.

I've read about car dealerships offering free rental cars, apartment complexes and realtors offering housing, churches setting up free meals for those in need, furniture stores giving away mattresses and the list goes on and on.

There is a lot of work to be done. But there is hope. Central Illinois is filled with generous and giving hearts. Washington is the same community that came together to give 'one more Christmas' to Dax Locke. They are a very strong community who will no doubt rise above this tragic event.


If you would like to help, you can donate to the
American Red Cross - Central Illinois Chapter.
Be sure to specify that you are wanting to donate to the tornado victims.


Posted by SexyMotherRunner at 9:18 AM