My husband, Fred, and I have been married for a little over 11 years. We dated 2 years before we got married. After we were married we worked together at a software company for a couple years. Then we owned a coffeehouse together while he also had his computer business next door. Then I became a stay-at-home-mom and he moved his office to our home. We actually like each other so spending a lot of time together is a good thing for us. I know it doesn't work for every marriage but for some reason, probably because I'm awesome and he's extremely tolerant, it works for us. 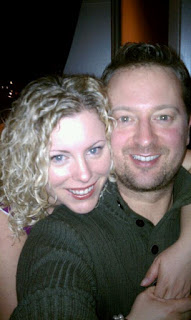 Fred, is also my training partner for the Bayshore Half Marathon. The Bayshore will be the first half marathon for both of us. I love that we are running it together. I love that we are training together. It's one more thing that we can enjoy and share.
One thing that we do not enjoy doing together though is shopping. Well, let me rephrase that. I'm fine with shopping and dragging him along, he's not so fine with being dragged. Or waiting in line. But before I get to that, let me set this up proper.
Saturday we ran 8 miles for our long run. It was the farthest distance either of us had ever ran. It felt great. What made it even better was that it was the end of 'Birthday Week' at our house and we had a couples massage scheduled for Sunday. I have been salivating over this for days. The stress of 'Birthday Week' would be melted away. Sitter was lined up, we were good to go.
Then the spa called. One of their massage therapists called in sick. I felt like I was 4 years old and someone just told me that my mom replaced my dead gerbil with a decoy and unicorns don't really exist. (I held out hope for the unicorns until I was 8, by the way.)
Massage out the window, we decided to just have a nice day date. This consisted of going for sushi and then exchanging a pair of shorts my son got for his birthday. My plan was to exchange the shorts and pick up a few more summer items for my kiddos since they have each grown 18 inches in the last year. Plus, June weather in March has left me in a lurch for dressing them. We usually don't worry about summer clothes until May... April if we're lucky.
Massage day turned shopping day is not exactly Fred's idea of Best Day Ever.
First we stand in line to exchange the shorts. The store is busy. My husband hates standing in line. I'm not fond of it but for some reason I don't have quite the deep-seated loathing that Fred seems to have. I can only assume that some sort of 'man-gene' makes this task more difficult than it really is. Similar to how when men get sick you'd think they somehow feel everything 5000 times worse than anyone else. (Fred is actually exempt from that but I've had some ex-boyfriends who may or may not have become exes for that very reason.)
Every time the clerk finished with one customer and moved on to the next in line, I heard a deep, loud, sighing breath. I kept looking over my shoulder to see if Darth Vader was standing behind me. Clearly, he of all villains would be interested in taking advantage of the 'Goodwill' sale going on. Each time I looked however, it was not Vader but Fred. Not just wearing a look of utter annoyance and disdain, but sighing loudly and emphatically enough to have someone direct us to housewares for a humidifier. Not really, but if they hadn't been so busy trying to ring up everyone else to get to us, I'm sure they would have. 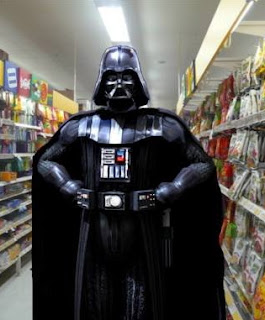 When I finally turned to him and said, "This is exactly why they have that little sitting area with the t.v. by the escalator.", I heard another woman chuckle. I think she has shopped with Darth Vader a time or too as well. In fact, it may have been her Vader who was nodding off in the sitting area as we rode the escalators up.
Once the exchange was made, I suggested we pick up a few other items for the kids to which Fred replied with this look... 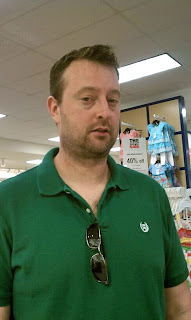 Read As: "You are F#&*%@$ kidding me, right?"
So we went for coffee instead. I really do like that guy. I'm very happy and blessed to have him as my partner in training and everything else.
We are following Hal Higdon's half marathon training guide - Novice 1 Program. So far so good!
Peace, love, happiness!
~Bekah
Do you prefer to train by yourself or with a partner?
Which training plans have you used?
Posted by SexyMotherRunner at 3:32 PM