My husband, Fred, suffered from Acid Reflux for several years. It was seriously horrible a couple of times. One time in particular we were vacationing in Michigan with family. It was our last day of vacation and we were suppose to be heading home. Instead, we headed for the ER. Fred was having severe pain. The 'cocktail' they whipped up for him in the ER didn't even make a dent. We were there for about 4 hours before they had finally given him enough meds to make the pain tolerable. We ended up staying in Holland an extra night before he could drive back to Illinois.
Fred started taking Prevacid. (Click here to see list of side effects)
We do not like to take medications. I do not want a doctor who will just slip me the free drug samples and send me on my way. I have made it a personal goal to never take any medication that has 'anal leakage' listed as a potential side effect. Although that one is not on the list for Prevacid, 'vomit that looks like coffee grounds' is listed and 'HEARTBURN' is actually listed as a COMMON side effect of Prevacid NapraPac Delayed-Release Capsules. So, let's get this straight... the prescribed medicine for heartburn can actually cause heartburn. (shaking head in disgust)
Even with the prescription, Fred still would have issues from time to time. (shocking, I know) He's never been big on taking any medication, even Tylenol. So, he began researching acid reflux in hopes of finding some sort of natural remedy. This is when he came across Apple Cider Vinegar. There was tons of info on the web talking about how Apple Cider Vinegar could help and even cure acid reflux.
Adding vinegar to an 'acid' problem did not sound like a good idea to me. *However, the theory is that the acetic acid in vinegar lowers stomach acidity, (Increases it's pH), since acetic acid is a weaker acid than hydrochloric acid. Also, vinegar, (acetic acid along with acetate salt), may help buffer and maintain stomach acid at a pH level of about 3.0. In this milder acidic environment, the stomach can still efficiently digest food but it causes less problems with the esophagus and thus less heartburn. *source www.apple-cider-vinegar-benefits.com
Fred went out and bought some Bragg's Apple Cider Vinegar. He took the Bragg's the next time he had a major flare up and experienced immediate relief. He started taking a teaspoon mixed with water 3 times a day. After a while he noticed that he wasn't having any symptoms from the acid reflux. He stopped taking his prescription and kept taking the Bragg's. 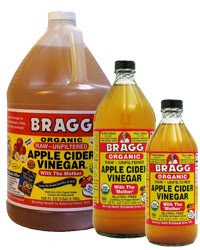 A few years later, he stopped taking the Bragg's except maybe once a month or so when he felt like the acid reflux was starting up again. Then he stopped taking it all together and had zero issues for a year.
At the beginning of this year, when we decided to make some big changes to our lives regarding health, Fred decided we should both start taking the Bragg's every day. In addition to helping digestive issues, Bragg's Organic Apple Cider Vinegar boasts several other benefits as well.
Internal Benefits
Helps Control Weight - Um, yes please!
Support A Healthy Immune System
Rich In Enzymes and Potassium
Promotes Digestion and pH Balance
Helps Soothe Dry Throats
Helps Remove Body Sludge Toxins - I'm not even sure what those are but they don't sound good...
External Benefits
Helps Maintain Healthy Skin
Helps Promote Youthful, Healthy Bodies
Soothes Irritated Skin
Relieves Muscle Pain From Exercise
We both take a teaspoon with water once a day. Is it delicious? Not so much. Is it awful? No, just not real tasty. I've actually gotten use to the taste and just shoot it back. (I've done shots that tasted much worse) You can add a little honey as well to make it taste better.
You can find Bragg's Organic Apple Cider Vinegar in most grocery stores and online at their website.
Have you tried Apple Cider Vinegar?
Tell us your experience with it!
Peace, love, happiness!
~Bekah
Posted by SexyMotherRunner at 7:20 AM