Sexy Mother Runner is going to be featuring a different runner every Friday!
Every runner has a story and we believe that sharing those stories is
a great way to share the gift of running while helping to motivate others.
Today's featured runner is inspiring in so many ways. She's a runner and a military wife, but that's not all... Patty has also been serving our country in the military!

Once upon a time there was a girl who hated to run. That would be me. I joined the military about 16 years ago and had to run two miles in Basic Training. I practiced running prior to the six weeks of he$$, but could only make it a half mile or so at a time. However, during the six weeks, I was able to complete two miles in 26ish minutes, and by the end of training, I ran it in 17 or so minutes. After that time, I mainly only ran the required 1.5 miles per year to pass my physical training test so I could stay in the military.

Fast forward to the end of 2008… I went on an all-expense paid trip to Iraq, where they would occasionally have races around the base. I entered a couple of the 5K’s, one 10K and eventually a Half-Marathon to pass the time and try to make life enjoyable while I was there.

The 10K was held at the Baghdad International Airport. There were 15 of us and I came in last. However, somehow I tied for third place with my boss. Here’s a proud photo of me displaying the award: 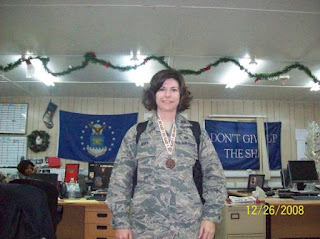 (Notice the girl in the background looking pretty bored, obviously not sharing the same excitement .)

While in Iraq, I lost 30 pounds (on purpose), mainly through eating healthy, not eating pizza, and not drinking alcohol. I probably ran a couple times a week, about 3 miles at a time on the treadmill. That was my Half-Marathon training. I was pretty nervous when I decided to enter this race. I remember drinking some water and eating a breakfast bar the morning of the race. I had no idea how to prepare. I ran slowly the first 11 miles, walked for 1 mile or so, then decided I needed to jog slowly or I wouldn’t make it. My legs were hurting pretty bad. I think my time was around 2 hours 45 minutes. The fast walker almost passed me, but I would not allow it.

When I returned home, I wanted to maintain my weight loss. I joined a gym, ran on the treadmill and worked out on the elliptical. I sought out races to enter to remain focused on having a healthy lifestyle. I ran the Jingle Bell 5K at the end of 2010, the Firecracker 5000 in 2011, and Steamboat Days (4 miles) in 2011.

A couple friends of mine at one of the races told me about the Peoria Sole Sisters and recommended that I look them up on Facebook since I was so interested in running. Before joining the Sole Sisters, I tried running a 3-mile route in my neighborhood. I would attempt running the entire route; however, I usually stopped and walked a couple times, even though I knew I was physically able to run the entire distance. I’ve been running with the Sole Sisters since August 2011 and have met so many wonderful ladies and formed many positive relationships. I love them!

A few Sole Sisters and I entered the Spartan Sprint in October 2011. It’s not all running, but it is 3.8 miles, with many obstacles to conquer along the way. It was more difficult than I anticipated, but it was a great experience and I would do it again in a heartbeat.

or November 2011, I decided to register for a marathon. I felt this goal would keep me focused on running for a longer period of time. If everything goes okay, I will be running at the GO St. Louis Marathon on April 15, 2012. I’ve been training since the week before Christmas, however, I have pain in my right knee and will need to treat it and decrease my mileage.
I have decided that I’m going to take care of myself, even if that means I won’t be able to run a full marathon. Running is my enjoyment and my way of relieving stress and being able to handle difficult people and/or situations. I want to be able to run and enjoy it for the rest of my life.
Here are some running photos…
Maka Maka 2011. From left to right below: Me, Crystal Bennett-Test, Jennifer Nelson-Gulley (a.k.a. Speedy), Tracey Skudder Sylkaitis (a.k.a. Cash Money) 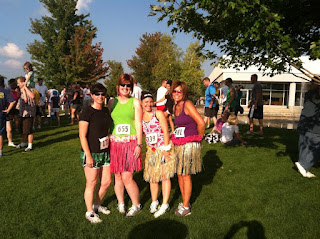 The Screaming Pumpkin 2011 (below). Just me. (I think the hat makes my butt look big. Also, those are not thigh-highs. It’s a slip that is made into shorts, with white tights.) 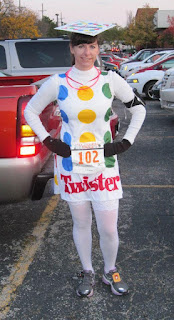 The Spartan Sprint 2011 (below). Me and two of the recruiters from the Peoria Air National Guard. 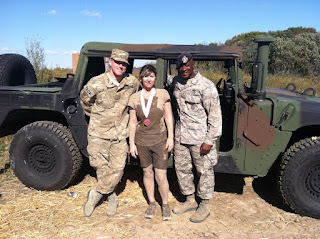 And last, but definitely not least…My wonderful husband who supports me in all my activities. Afghanistan is basically his second home… 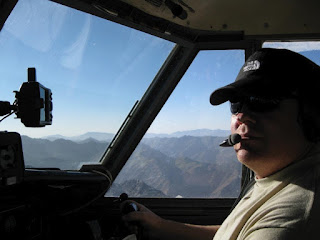 If you would like to be one of our featured runners, email us at sexymotherrunner@yahoo.com!

We would love to hear from you!

Posted by SexyMotherRunner at 7:05 AM