Sexy Mother Runner is going to be featuring a different runner every Friday!
Every runner has a story and we believe that sharing those stories is a great way to share the gift of running while helping to motivate others. Today's featured runner is our friend, Traci.
Traci's story shows that you just never know where running can take you. Even when you take time off, it's always waiting for you when you're ready to come back.
Meet Traci

Hmm, let’s see… where shall I start? Well, I guess it all started in high school where I was a sprinter. I tried following in my sister’s footsteps but eventually realized that I was never going to be as fast as her, so I turned to softball instead. I also tried cross country in school but wasn’t able to finish the first run of the season, so I quickly checked ‘distance runner’ off of my list. 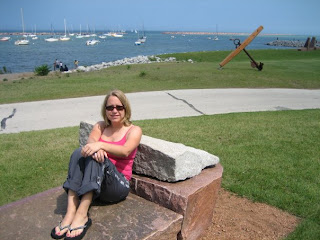 After high school, I ran on and off mainly as a form of exercise. I never ran very far… maybe a mile or so. When I started my first ‘real’ job out of college, I was in charge of coordinating a 5K/Half Marathon event in the Bloomington/Normal area. I loved this event and eventually entered myself into the 5K race for the first time. What a great feeling it was to finish the race… and, more importantly, not be the last one! I signed up for a few more races after that which I enjoyed, but never really stuck with it.

I really got into long distance running again a few years ago. I decided to sign up for building steam, which is the training program for Steamboat. I couldn’t believe my eyes when I walked in to the gym that first night. I figured there may be a large group of people, but there were literally hundreds of people there! I didn’t know what pace I ran, so it was a little intimidating at first. However, they assured me that I would find the right group and I did. I really enjoyed running with other people and I made some new friends and re-connected with some old friends as well. So there I was. Sprinter turned long distance runner. I couldn’t believe I got to the point where I thought 3 miles was nothing! So I signed up for 5, maybe 6 races that year… including a 10K. I had never run 6 miles before in my life. Freaking fantastic! I’m pretty competitive with myself, so I do try to beat my PR’s for each race. However, I’m pretty happy regardless of my time. Bottom line is I’m glad I did it. 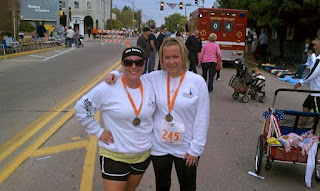 I also managed to run 7 miles not too long ago with my friend Bekah, which was pretty awesome. Speaking of Bekah, can I just say, I remember when she asked me when running became “fun”, because she didn’t exactly love it at that point. However, she managed to persevere and look at her now. She’s currently training for her first ½ marathon! I remember running with her for the first time and thinking how cool it was that we were finally running together! I also remember running with my friend Stephanie when we first started running building steam together and seeing how much she has accomplished in the last few years. She ran her first ½ marathon in December! It’s so inspiring to see how much my friends enjoy running now!

I still enjoy running very much. Last year, I had signed up as a volunteer to be a team leader for building steam, but for personal reasons, I wasn’t able to. I hit a major slump in my life and have been struggling to bounce back. I tried getting back into the groove last fall, but it proved to be difficult. I was able to enter a few races, but not as many as I had hoped. Hopefully this year, I will be able to get back into the swing of things, because I truly believe running is good for the mind, body and soul!

My goal is to run a ½ Marathon in Europe. Who wants to join me?

Cheers to all of you Sexy Mother Runners (and Sexy Runners too)!

Posted by SexyMotherRunner at 7:58 PM