How safe is bottled water?

According to the Natural Resources Defense Council, bottled spring water isn't safer than common tap water after a 4 year study. The study found that about 25% of bottled water was essentially "tap water in a bottle".

Currently there are no regulations on labeling and transporting of bottled water. According to the NRDC, after testing 100 bottles of bottled water chemicals like aresenic, general bacteria, and toluene were found.

How do you know if your bottled water is safe?

Each bottle has a number that tells what kind of plastic it is. Just because the FDA approves all plastic doesn’t mean it’s safe. Certain plastics leak chemicals that have been linked to risks with brain development in fetuses, infants, and children. Avoid drinking bottles of water with the number 3, 6, or 7 on it.
Plastics with the #3 on them are also used in food containers and have been linked to certain types of cancers, hormonal imbalances and other diseases.
Plastics with the #6 on them have been shown to interfere with hormones.
Plastics with the #7 on them are typically used for baby bottles and 5 gallon water bottles. This plastic can leach a toxin that has been linked to breast and ovarian cancer. This toxic chemical was found in 90% of the people tested according to the U.S. Center for Disease Control and Prevention.
Plastic #7 shows the greatest concern. Plastic #3 and #6 have been linked to adverse effects.
Use, but don't reuse plastic bottles with numbers 1, 2, 4 & 5. At this time these numbers are being reported as safe, but may not be safe when we reuse them. Plastic bottles tend to get cracks in them that are sometimes too small to notice. These cracks can cause toxins to leach out.
Don’t heat bottles or any other plastic containers. Even good plastic can leach toxic chemicals when heated up. Think twice when you leave your bottled water in the car on a warm summer day.
If you like to know if your bottled water is in fact tap water, check out the bottle label or under the cap. If it states it is "from a municipal source" or "from a community water system", this means it is supplied from tap water. Some stated have a bottled water program that can be called and they can determine if it is tap water. If your state doesn't have a bottled water program, try calling the company or writing them. 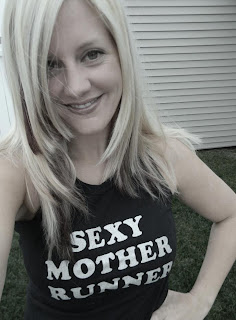 
*This is solely the opinion of the Sexy Mother Runners based upon cited research. You should always consult with your physician with any health concerns.

Posted by runningallfifty at 5:12 AM