Sexy Mother Runner is going to be featuring a different runner every Friday! Every runner has a story and we believe that sharing those stories is a great way to share the gift of running while helping to motivate others. Today's featured runner is our friend, Laura. Laura is one of the most motivating people to run with. She sacrifices
her own speed to stay with other runners to help them meet their goal.
Laura's life and running story will inspire you!
Here's Laura's story...

My name is Laura Renn and I am a single Divorced mother of 2 girls.  I teach First grade in Pekin Illinois.  This is my running story:


I have always been driven to be positive and athletic but in 2008 I wanted more for myself.   I was unhappy and  wanted my life to be mine.  I decided that I needed to work harder on “ME”.  I began weightlifting on machines to help my casual gym runs.  I began losing weight and feeling better about myself.  I started running 5Ks, then a 10K, a trail run until I was competing with myself for faster times.  I was breaking in to a new me.


An old friend of mine (Andy) told me he was going to complete his first Triathlon.  I was incredibly moved by his spirit and determination.    It was then I decided to try one too.  I bought a bike and rode it a FEW times.  I started swimming at the local YMCA.  I had swum in high school and grade school and knew it would come back to me.  Incredibly excited and pushed by adrenaline  I completed my first Sprint Triathlon in 2009 (300 meter swim, 12.5 mile bike, 3 mile run)and even took third place in my age group to my amazement!  I was hooked.  My girls loved the trophy I brought home. 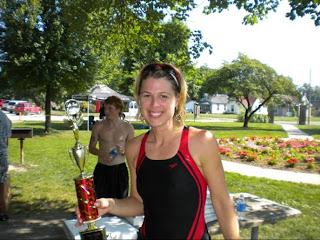 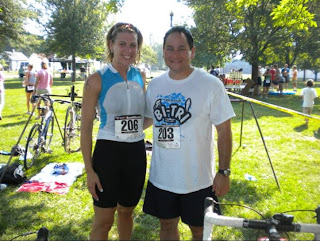 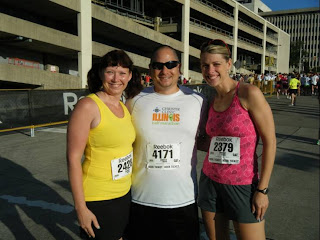 In 2009, the newly divorced me  completed the Iowaman, Last Chance Tri, Illini Tri, Tri-Shark Triathlon.  In 2010 I competed in my first Duathlon in Wisconsin.   ( 5k run, 32k bike, 3k run).  I loved it but it was tough!   That same weekend, my two children completed a children’s Tri the same weekend.  I was one proud Mama, as you can see. 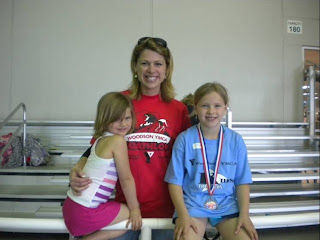 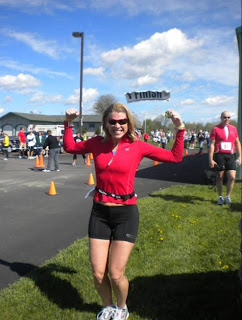 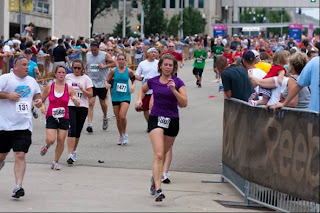 2010 also brought the changing of states, jobs, schools and friends which was hard for me.  Running is how I relieve stress and there just wasn’t any spare time.  The year was flying by and the pounds were creeping back.    It was now 2011 and I needed to break the mold again.  Who was the new me?   Looking for something to JUMPSTART my interest I hooked up with the first Sole Sisters in a run from the old Running Central.  It was there I met Marianne Miller and my running gal pal Heather along with another Wisconsinite Jessica, Casey and many other Sisters.  They all inspired me and I began running more and more.  Sole Sisters made me LOVE running and not only use it as a stress reliever but as a social activity as well.  There is nothing like a run and talk with the girls.  There is nothing like cheering others on.  This was and is the perfect group for me!


One Sole Sister in particular, Heather Haynes, inspired me to run more frequently and tackle longer runs.  I started running 6, 8 and then even 10 mile runs on the weekend.  I had never run that far.  My times became faster and my strength and endurance increased.  Meeting all of the supportive women from this group has kept me motivated and and ready to run!  Thank Heaven for the Sistas!


My boyfriend, Andy, has become a runner too.  We have done countless races together .  We drive each other to do better and want more from life.  HUNGRY to live.  I ran my first Half Marathon on Sept 11, 2011 in Springdale Cemetery with his support.  It was unbelievable.  Another challenge conquered!  My daughters, SISTAS and boyfriend cheered me on the entire way. 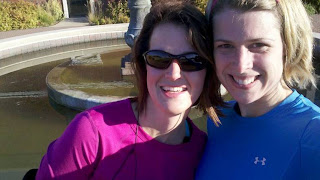 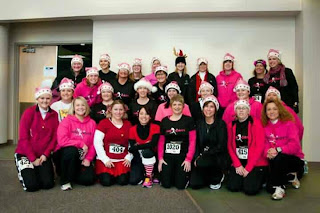 Now it is 2012 and I will be 40 this year.  I will complete a  1/2 Marathon, Triathlon and Full Marathon this year.  With many thanks and love to my man, my family and my Sole Sisters for everything you give to me.  I feel that the new me is ever changing with life and constantly growing as a person.  I am happy to be a runner!

Want to be one of Sexy Mother Runner's Featured Friday Runners? Email us at sexymotherrunner@yahoo.com
& watch your story inspire someone!

Posted by runningallfifty at 5:50 AM