Sexy Mother Runner is going to be featuring a different runner every Friday! Every runner has a story and we believe that sharing those stories is a great way to share the gift of running while helping to motivate others. Today's featured runner is our friend, Heidi. Heidi is a remarkable person, mother, friend, couselor, and runner!

This is Heidi's story...


It still kind of cracks me up to be featured on a running blog....

I guess it has taken me awhile to really consider myself a runner. I ran track in junior high (literally one million years ago), and hadn't really run since then. Throughout college and before having kids, I would periodically try to get into a workout regiment, but nothing ever stuck for me. After having 3 kids, and feeling completely out of shape, my youngest brother and his wife started running and my sister-in-law would occasionally make comments about how I should join them running a 5k sometime. At first, I would just laugh, but then in early 2010, I thought I would secretly give it a shot by starting on our treadmill at home, with the goal of working my way up to be able to run the Race for the Cure in May.

I will never forget the experience of running my first 5k. I was horrible at pacing, so I had to walk several times from running too fast, but it was absolutely exhilarating! I was so proud of myself as I crossed the finish line that I didn't even care what my time was, it just felt so good to finish amongst the cheers of the crowd. From that point on I was hooked. I have always been a person who loves a challenge, and I realized that running was something that I could challenge myself with. At the same time, I was also finding that my running time became "me time", which I needed so much. Running gives me time to clear my head, release stress, and also feel great about becoming more fit. Everytime I hit the pavement in my neighborhood, I remind myself that the first time I ever ran outside, I couldn't run from my house to the beginning of our subdivision without stopping to walk. Now I can run up to 9 miles!

Last summer while running in the Steamboat 4 mile (one of my favorite races so far), I looked at the woman running next to me and thought "wow, she has beautiful hair", yes this is what I do to pass the time during races, and then realized it was Danyelle. I had only briefly seen Danyelle in the years that we knew each other from Macomb at Western, but we reconnected after the Steamboat. Not long after that, she and I decided to sign up for the Spartan Sprint. Leading up to that event last October, I had many moments of panic and "what did I do" kind of thoughts. It ended up being one of the toughest, but most rewarding days of my life, and also a fabulous way to celebrate my 37th birthday. My body had to heal the from Spartan, and so the next time that I ran was at Jess' awesome Cupcake Classic. My kids were with me that day on the run, and my 5 year old daughter begged to get out and run at the finish. So far of my 3 kids, she seems to be the most interested in joining Mommy, and proud of how fast she is. 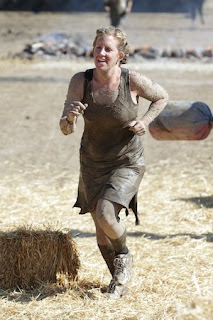 My enjoyment of running went up another level last fall when I started periodically running with Sole Sisters groups on the weekends. I had always run by myself up until then, which I still love at times for the solitude of it, but running and chatting and meeting new people has made running longer distances especially even more do-able. My next challenge for myself is my first half in April. Just like the Spartan Sprint, I am having some moments of thinking maybe I was briefly insane to register, but then I remember how much I love challenges and know anything is possible. "The miracle isn't that I finished, the miracle is that I had the courage to start", John Bingham 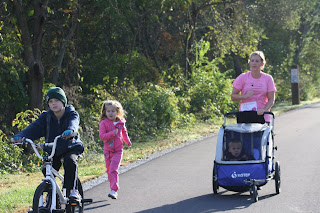 Questions? Comments? Email us @ sexymotherrunner@yahoo.com. We would love to hear from you!﻿
Posted by runningallfifty at 12:59 AM