Sexy Mother Runner is going to be featuring a different runner every Friday! Every runner has a story and we believe that sharing those stories is a great way to share the gift of running while helping to motivate others. Today's featured runner is our first male. I think you will all agree when I say men can absolutely be 'sexy mothers' too!
Tyler's Story
As with many things in life that make us feel good, I developed an early addiction for endurance sports, with running being my gateway. I've always had an ambitious nature to evolve myself and my capabilities. Running was the first portal to help me expand my physical capacity and habituate toward greater health.
However now looking back, I have taken so much more from running than just physical benefits. After all the ups and downs I have faced over my short running career, it has been the things that I've learned along the way that I value most.
The first reason I started to run was to lose weight. As a college student with a new regiment for my sophomore year, running helped ignite my inner-discipline and contributed to many new healthy habits. The new perspective came with further ambition to take my physical endeavors to greater levels.
In late 2010, I completed my first half-Ironman in Las Vegas. Although I successfully crossed the finish line, several weeks later I started experiencing reoccurring injuries, ranging from IT-band issues to lower back pain. Those injuries haunted me for over a year. I was able to pinpoint a combination of over-training and improper form as the primary cause.
I was deprived of running and cycling for the entire 2011 season, which meant no triathlons. Not being able to do the things that I love was depressing. But those down moments were short lived, and I was able to learn a bit about myself.
While on the road to recovery, I found yoga to be a surprisingly intense, yet low-impact alternative. That significantly helped restore my sanity. I also started practicing Somatic exercises to realign myself, which proved to be more effective than any physical therapy I have ever attempted.
Silverman Half Ironman 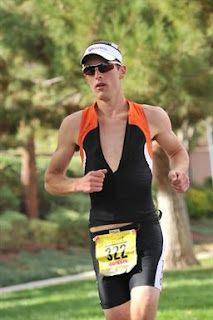 These new activities enabled me to become more in-tune with my body, and the deprivation from endurance sports was actually a blessing in disguise. I put all things of the past aside: my old running habits, my inner-competitive spirit against my training buddies, and my overall addiction for adrenaline.
Now at the start of 2012, I am finally getting back into the swing of running. I have decided to take a more primitive approach to my running style, focusing on listening to my body, and being as aware as possible throughout the movements.
The emphasis of my 'come-back' centers on the fundamentals of the "Chi Running" method as well as barefoot running. These techniques are proven to help runners avoid injuries by forcing them to run in such a way that minimizes impact and increases speed. Even ultra-marathoners are crossing the finish line wearing minimalist, barefoot running shoes!
Now, the most primary reason I run is for freedom and peace of mind. Running is a primitive activity that promotes a liberated sense of self, free of life's stressors. It's an easy escape that can completely change your mood and your appreciation for living - as long as you can keep doing it.
Have you tried Barefoot Running?
What do you think about it?
We will be posting more information about Barefoot Running in the near future.
If you would like to be one of our featured runners for Featured Runner Friday, send us an email and let us know!
sexymotherrunner@yahoo.com
Posted by SexyMotherRunner at 5:58 AM