FlipBelt Review and Giveaway To Celebrate 5000

We recently hit 5000 followers on our Facebook page so we wanted to have a Giveaway to celebrate! Well, the awesome people at FlipBelt are helping us make that happen!

What's a FlipBelt? Well, I'll tell you. FlipBelt is a running belt that holds your personal items for you. It's different from other personal items carriers though because it doesn't have a pouch to hold your items. The items actually slide into the belt once it's around your hips or waist. Then you flip it and all of your belongings stay nice and secure.

I just got my very own FlipBelt this week. So far I have used it twice and so far I'm very happy with it. My favorite thing about the FlipBelt is that it doesn't feel like an extra piece of equipment when you are wearing it. It slides around your hips and doesn't move. I forgot I even had it on. This is huge because I do not like to have any excess baggage when I'm running. I don't even wear my wedding rings on runs. For me, my hydration belt is a necessary evil on long runs and I feel pretty much the same about my Garmin. I really don't like feeling encumbered in any way when I'm running. Thankfully, the FlipBelt does it's job without me even noticing it's there. 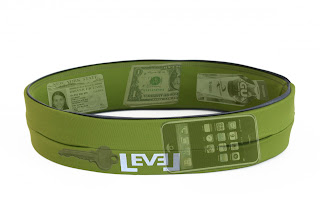 On one of my runs my FlipBelt held my Android phone and my car key. The items are secured by sliding them into the belt. Genius. I was a little worried about my car key sliding out during my run but it stayed nice and snug in it's place. My phone also never bounced or slid around. I especially love being able to stow my belongings so that they don't feel like an added weight while I run. Often they are bouncing in a pocket or pouch which can get very irritating for me. In the FlipBelt though, I wasn't aware of them at all. I seriously love that feature! I could have easily fit more items as there is plenty of room for several GU's or a small box of raisins, money, ID, or whatever other small items you may need when running...such as pepper spray, pictures of Ryan Gosling saying he's waiting for you, or a light saber.

At first I was concerned about the belt actually staying in place. I positioned it around my hips and was very happy to find that it stayed in place the whole time I was running. I never once had to stop to adjust it. 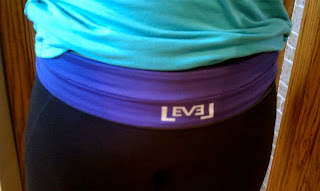 The FlipBelt is lightweight and comes in a variety of cool colors for both men and women. It retails at $24.99 or you can get a slimmer FlipBelt for $19.99. I usually expect running apparel to be more on the expensive side (seems like I'm always spending money on running gear!) but I found the FlipBelt to be a reasonable price.

In case you haven't figured it out yet, I'm seriously loving this FlipBelt! It will definitely be accompanying me on my future runs.

How do you get a FlipBelt of your very own?

You can get TWO entries if you also post on our Facebook Page  and tell us why you want a FlipBelt!
Also, be sure to check out FlipBelt on Facebook here, tell them Sexy Mother Runner sent you!