Every runner has a story...
At Sexy Mother Runner we believe that sharing those stories is a great way to share the gift of running while helping to motivate others. Tammy's story is is an excellent example of 'where there's a will, there's a way.' She's overcome the obstacles that so many runners face, obstacles that often deter a new runner. 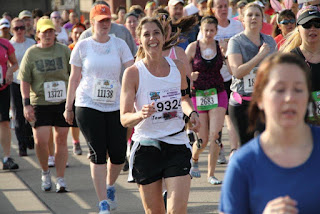 My running career started while taking pictures of my sister (in-law, but have known her since I was 2, and we’re the same age… you get the point) finishing a full marathon.  I stood at that finish line for more than an hour watching strangers cross that line, running in with their kids, their husbands, friends , sisters, mothers, fathers….  It was so emotional!  I cried the entire time I stood there! I cheered my bloody head off for these people!  It was so amazing!!  I wanted to know what it was like to feel the other side of that fence, cross that line for myself…  I HATE TO RUN!!! Lol

That was in May of 2011, I decided to go for it and started training for a 5K on Thanksgiving in late Aug/ early Sept that year.  I didn’t tell anyone but my husband and 2 kids and my mom that I was running.  (boy, was my sister and MIL a bit ticked!!)  but it was local and I was afraid of many things, the least of all was not finishing.  I did, and oh that feeling of completing a race – no matter what your time was??!!!  I was hooked!!!  But the holidays were upon us as was winter, so running took a back seat for the next month and a half or so.

On Christmas day, at dinner my husband’s family was sitting around afterwards just talking.  My sister,, Aunt and I started talking about running.  I had said I may want to try for the ½ marathon in May, I swear my aunt said she’d do it too… I must have been hearing things!  For Christmas I had gotten winter gear and a heart monitor from my mom’s (mom and MIL).  I was set…. Dug up a training plan and was good to go.

I remember calling my sister after one of my 1st runs crying that I couldn’t breathe, my lungs were burning!!  She said I was just probably running too fast for what I was use to and the cold.  Okay!  Problem solved!

Over the next few months, my miles increased, my speed didn’t… but I was okay with that.  I was having other problems!  My feet!  Now, let me tell you… I hate feet!!  Mostly because I have stupid feet… a big ol’ bunion on the left foot really screws up and limits footwear options!  I had been fitted for running shoes by a very good running store, and actually LOVED my Newtons! (and still do…)  but I was getting blisters like you wouldn’t believe.  Painful ones, not just regular old blisters….  Of course not.  Tried different socks, then another pair of socks.  Tried Body Glide, moleskin, blah, blah, blah….  Was even filling my socks with corn starch before my runs (yeah, I ran in clouds!!).  Was about to have to replace my shoes… when I was told maybe custom orthotics would work…. well please hit me over the head with a 2x4!!  I had a brand new pair sitting in the closet b/c they were too painful to wear… but maybe it was time to get that fixed!  A wonderful local store fixed them right up for me!  Love, love, LOVE that store!  My painful blisters were gone!!!  Oh, I still had blisters (and a few black toenails) but they weren’t painful… I COULD RUN!!!!!

I ended up finding out, after my next 5k that was a month later, that my ITB was not tight, it had scar tissue build up from past surgeries.  (Nothing straight and simple for me!!)  Had a chiropractor do a release on it… and have not had any problems since!  (But, yes, I still ice, stretch and strengthen like a fiend!!)  AND… got Injinji socks!!  Answer to my feet’s prayers!!  AND (last one) my 5 black toe nails finally fell off and were starting to grow back!!

That brings us up to about June of this year….  I had suspected during my training that I suffered from EIA (exercise induced asthma).  I had borrowed my mom’s (such a no, no!!!) inhaler and was managing well.  My runs were still walk/run mixes anyway.  But I was okay with that.  Went to the doctors and was prescribed my own inhaler and a anti-allergy med to take daily.  Problem solved…. Or not.  Summer training was a bust.  I just can’t breathe.  Even with the meds.  Running was sporadic at best, more walking when I ran, lots of frustration, depression and aggravation!  Why do I run???

As I write this, I’m recovering from a 7 mile run this morning.  I’m not giving up. I will find a doctor who can help me find answers and a solution.  I will train like I’m running the full in May of 2013 – this gives me lots of extra time to go at it slow.  I’m registered for a 10K at the end of this month, and a 5k in the middle of Oct.  Hopefully I can find a few more before the weather really breaks into winter in southwest PA.

But I’m not giving up… as much as my head says to during my runs, I AM NOT GIVING UP!!!!

I have my sister who continually motivates and inspires me.  I have friends whom I inspired to start running. I have kids whom I am trying to teach goal setting. Also what achieving and hard work is really all about – esp. with obstacles.  I will not let these people down.

Posted by SexyMotherRunner at 8:18 AM