It is most definitely Fall in Illinois! It was even more Fall in Michigan when I went up there a couple weekends ago. Their trees turned before ours and were full of beautiful reds, golds, and yellows. While we were there, we took the littles to an apple orchard to pick apples. We always hit a local orchard at home but thought it would be fun to check out an orchard while in Michigan. So, we went to Crane's Orchard in Fennville, MI.

This place is pretty big and has lots of fun stuff for kids so if you go you may want to plan a whole day. We only had a few hours but were still able to have a good time. My kids loved going out and picking the apples. This was evident by the amount of apples we ended up buying. They had several variety that we got to try before we went out to pick so that we would know which ones to get.


There's really no other way to put it... the apples were GINORMOUS. No, I mean, really really huge. They told us that one they had weighed earlier in the day was 1.4 pounds. That's just one apple. Of course at this point my non-organic alarm is going crazy but I chose to ignore it because this was about having a fun day. I didn't ask if the apples were organic or not. I just went with it. 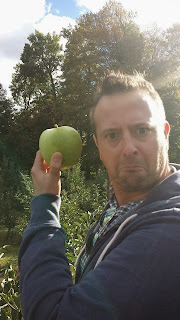 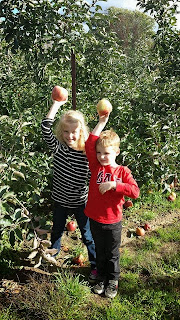 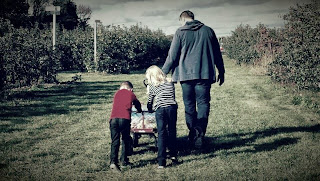 So, now I have all these huge, yummy apples sitting on my counter and of course they are taking up the entire counter. What to do... Vegan Apple Crisp!

I made this recipe yesterday and took it to a family dinner. Everyone ate it and said it was good. My family really has no qualms about brutal honesty so I took them at their word. Plus, I left with an empty pan. The 'crisp' part wasn't quite as crisp as I like but I thought overall it was still really good.

7 Cups Sliced  and Peeled Apples (Because I used GINORMOUS apples it only took 3 to make 7 cups)
It calls for tart apples but I didn't have any tart variety so I used what I had and sprinkled lemon juice over them.

I wish I had taken a picture but I didn't think to do that... It looked just like apple crisp though so, you know, just use your imagination here.  :)

Peace, Love, Happiness!
~Bekah
Posted by SexyMotherRunner at 8:31 AM